“Hard-to-Reach” Prospects: How to Double Your Response Even From the Most Skeptical Audiences in the World [Award-Winner, Plus a Video] 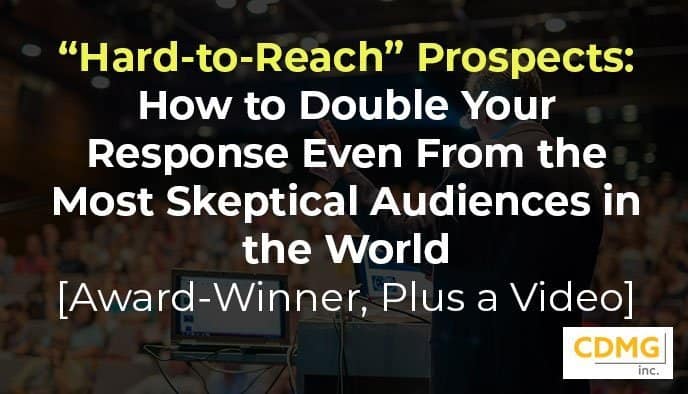 How do you successfully market to small, niche, skeptical audiences?

Let’s take a look at one example my team and I worked on.

Giltspur is a leading designer of high-end custom trade show exhibits, and had a fantastic new product, GilCor®. Because GilCor® is a breakthrough construction material with far-reaching, cost-saving features, Giltspur needed to tell this story to high-level decision makers in large companies.

This poses a problem: traditional direct mail, email, banner ads, phones…would be a waste of time and money.

But we had a creative solution…

My staff and I came up with a dynamic three-dimensional, two-part campaign to their targeted audience of trade show managers and marketing directors. These are the most skeptical audiences in the world.

A three-dimensional piece is a box sent by Fed Ex. It has a powerful direct response letter and powerful content that has a “wow effect”. It gets by the gatekeepers and is approved.

The first box said on the outside, “Open immediately! Cost-cutting breakthrough inside.” It included scissors and three sample invoices for shipping, and for the setting up and tearing down of a trade show exhibit. The point: how 25% to 40% of typical costs could be “cut” with GilCor®. A two-page letter was included.

This was followed three days later by Box #2 which was “A special gift: a dollar saved.” It included one-dollar and two-dollar bills with the headline: “Make every dollar in your trade show budget work like two with GilCor®.” This also included a two-page letter and a strong offer.

The results were dramatic…and incredibly profitable. In fact, each campaign got over a 20% response rate.

Client Richard Murphy said: “Craig, you and your staff are to be commended for a remarkable campaign…the best ever for Giltspur.

…Our goal was to generate appointments from 10% of the target audience. Your very creative direct mail program helped us garner over 20% response. Fantastic!

Even better, the appointments have resulted in sales of custom exhibits.”

This promotion was so successful it won the Business Marketing Association award for professional excellence.

As you can see, a three-dimensional campaign is a mailer that shows a concept or a theme in a clever, interesting way. It’s also highly memorable.

There’s a higher degree of anticipation because your prospect will be curious about the item inside and who it’s coming from. Three-dimensional campaigns are also fun for your prospect.

Although the package contains a sales letter and possibly a lift note to tell your story, the best part is making a point of placing a call a few days later. And you can bet that your prospect will pick up the phone and remember who you are.

A three-dimensional campaign is obviously more expensive (per piece) than a classic direct mail campaign. However, it can be incredibly effective when seeking out a smaller number of prospects, such as a specialized targeted audience, where you have a high wager.

Take a look at my 3.5 minute video briefing “3-D Marketing” that gives you more details.

If you’d like to talk to me about creating a powerful 3-dimensional piece for your next marketing campaign, give me a call at (310)212-5727 or email Caleb at caleb@cdmginc.com.