After the stock market meltdown of 2008, many U.S. investors lost their shirts. Some watched as 25% of their retirement savings disappeared and others saw 40% vanish from their portfolios, creating shock bordering on mass hysteria.
While estimates vary on how costly the crash was for individuals and companies, most  figure the loss was in the
tens of trillions of dollars.

A short time later, a multitude of angry, disillusioned investors began to cancel their investment newsletter subscriptions or chose not to renew them. As a result, a number of  financial newsletters lost 40%–60% of their subscriber base.
Nervous about the country’s soaring debt and how the government continued to spend, spend, spend…investors money supply would invite double-digit inflation, making our country’s economic ordeal even worse.
Because of the dramatic swings in the economy, hard money investments—such as gold—became much more attractive to this group of investors who viewed it as a way to prosper in an uncertain economy.
Timing of newsletter launch was critical It was the perfect time to launch Swiss Confidential, a new type of  financial newsletter based on free market principles.
U.S.-born Scott Smith had spent more than 30 years as a member of the Swiss banking elite and wanted to share the
wealth-building, asset-protection and gold investment secrets he had learned with his fellow Americans.
Creative Direct Marketing Group, Inc. (CDMG) had previously produced two versions of a magalog and landing page for Scott that achieved an impressive response rate.
Based on the outstanding results, he turned to CDMG once again to develop a successful yet cost-effective solution that would extend the original promotion as well as increase his subscriber base.

The team at CDMG immediately went to work on Scott’s project to come up with a high-pro le way to promote the launch of Swiss Confi dential during the worst economic climate in half a century. 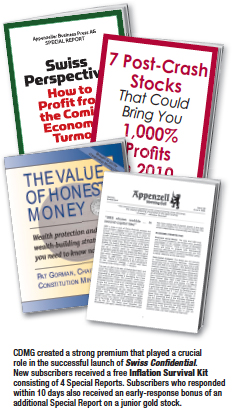 The campaign also mentioned the huge pro t potential of an emerging gold stock that he was currently recommending as a way to encourage investors to sign up for the newsletter immediately.
At the end of each spot, viewers and listeners were directed to either call a Toll-Free 800 number or visit a customized landing page for the detailed information they needed to subscribe to Swiss Confi dential and invest in the featured stock.
To attract even more subscribers, Scott’s newsletter included a compelling offer for potential subscribers: A FREE 4-part In ation Survival Kit.

The broadcast campaign generated new paid subscribers, plus helped create a lift in the multimedia campaign, turning it into one of the most successful newsletter promotions of 2009—despite an uncertain economy and cautious investors. Swiss Confidential attracted more than 1,000 paid new subscribers in a little over 6 months.
Your company can experience similar success with your next direct response campaign, whether it’s mail, print, online, video or broadcast. Call or contact Creative Direct Marketing Group now at 310-212-5727 for a FREE, no-obligation, 30-minute consultation. Craig and his team of professionals will give you several ideas you can use immediately to get more profitable results from all your advertising and marketing.