Modern elections are all about social media and direct marketing.
How are the current candidates doing on social media?

Donald Trump is dominating the social media. The third-party candidates are not even close.
How are the major party candidates doing on their email campaigns?
Here is the color coding for each of the vertical bars for the graphs below:

Hillary Clinton still dominates in this arena, but Donald Trump and other Republican organizations are catching up to her. Now also how drastically Hillary Clinton’s email list has dropped!
Percentage of Emails Opened:

On this metric, Donald Trump and different Republican Party operations still romp Hillary Clinton. The Republican campaign enjoyed a considerable spike at the August, too.
Delete Without Opening Rate:

Clinton and Trump’s campaigns are taking on nearly identical deletion rates.
Rate of Delivery to Spam:

The Donaldtrump.com camp has done a much better job of eliminating spam issues, and now reports lower spam rates than the Hillary Clinton camp. The Republican Party eblast campaigns, however, are still marred with high spam rates.
Complaint rates: 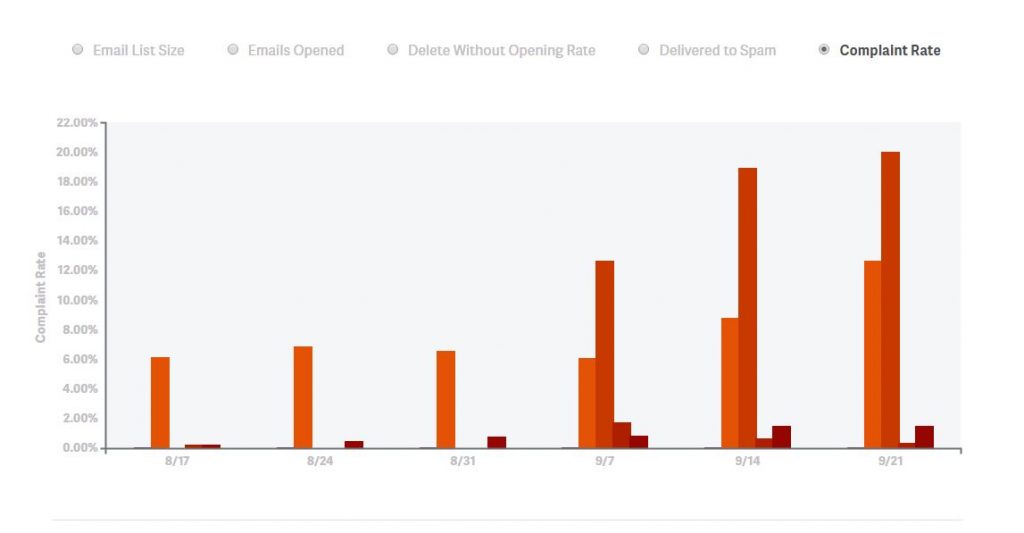 The complaint rates for the Hillary Clinton Camp are non-existent (keep in mind, though, that more people are dropping off her list than Trump or the Republican Party lists).
The complaint rates for the other Republican campaign sites are YUGE, and need to be looked into.
What do you think of these email and campaign data? Email me at craig@cdmginc.com.