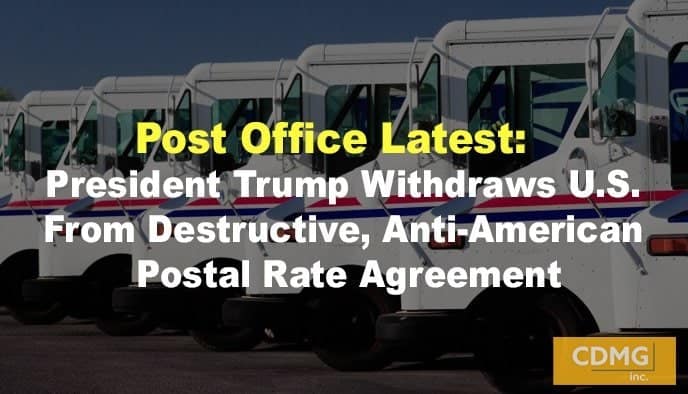 The post office is $50 billion in debt with a looming taxpayer bailout ahead…failing U.S. businesses with skyrocketing postage rates…and being run into the ground because it’s a government-run monopoly without competition or accountability (see this article).

A little-reported step in the right direction has just been made.

Now, President Trump is taking action to protect American businesses and boost the economy by withdrawing from an unfair and damaging agreement under the Universal Postal Union (UPU).

The UPU has made sure that China gets lower rates on shipping than the U.S. does – on shipping products to America.

You read that correctly – China gets a fat, unfair discount, allowing it to flood our markets with cheaper products. American companies, however, are left to struggle to meet rising rates, made higher because the bureaucracy, unions and politicians.

The UPU is a 144-year old institution that sets fees that postal services charge to deliver mail and packages from foreign carriers.

Because China is still considered a “developing nation,” it has received discounted rates for decades. Now, China’s economy is booming and they are a direct competitor to the U.S. But still, they get the same cuts inside the U.S. from the USPS – and American companies suffer as a result.

Again and again, Trump has accused the United Nations and other international institutions of making decisions that hurt the U.S. Now, he’s slamming down his fist and demanding fair rates by withdrawing from the UPU.

Withdrawal from the UPU wouldn’t take place for another year, allowing Trump time to negotiate a new agreement. Trump is moving towards a system of “self-declared” rates, meaning the U.S. would set its own prices for shipping international packages of every size (Currently, self-declared rates are permitted only on packages larger than 4.4 pounds).

Trump’s stand against the anti-American agreement of the UPU should help boost the economy and give much-needed relief to American businesses taxed with unfair competition caused by the U.N.