He looked to CDMG for the solution.

Inner Circle 2000 locked subscribers into a 5-year commitment with a very strong offer that included Special Reports, a 5-year subscription extension to Intelligence Digest and sister publications Economic Intelligence Review and Islamic Affairs Analyst, and a hotline to the “Intelligence Information Center.” Club membership also included two admissions to the Intelligence 2000 Conference to be held at the turn of the century in London. 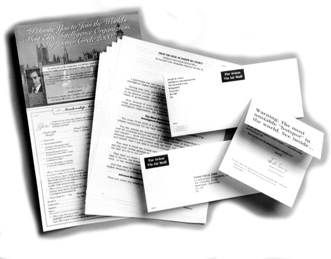 According to Joe DeCourcy, the results far exceeded his expectations. Somewhat skeptical of the club concept in the beginning stages, he quickly became a believer as responses began rolling in. Mailings produced an impressive 22% response.