One of the most powerful response rates I’ve seen have been from 3-D campaigns for business-to-business and consumer audiences.
I’m not talking about movies from the 1980’s. I mean a special campaign featuring a dynamic, hands-on three-dimensional mailing piece which target small audiences and get big margins.
A three-dimensional piece isn’t a traditional direct mail flat letter or postcard. It’s a box with powerful content and a “Wow!” factor.
Sometimes there is one effort … others three or four.
Here is a two-part campaign I did: 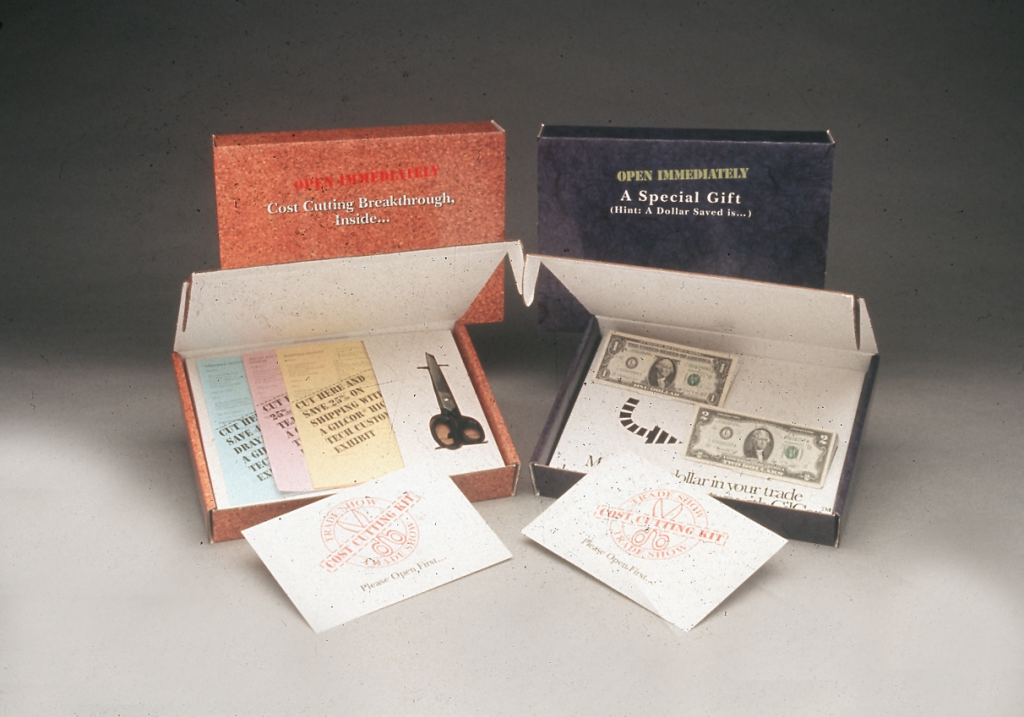 On the left, the prospect was given a pair of scissors and a coupon to “cut their shipping costs in half.” The campaign on the right featured a 1-dollar bill and a 2-dollar bill. It was a visual play on how the prospect could double his money.
As you can see, a three-dimensional campaign is a mailer that shows a concept or a theme in a clever, interesting way. It’s also highly memorable.
Your prospect receives the piece by UPS or FedEx, rather than regular mail, so it already commands attention.
There’s a higher degree of anticipation because your prospect will be curious about the item inside and who it’s coming from. Three-dimensional campaigns are also fun for your prospect.
Although the package contains a sales letter and possibly a lift note to tell your story, the best part is you can make a point of placing a call a few days later. And you can bet that your prospect will pick up the phone and remember who you are.
A three-dimensional campaign is obviously more expensive (per piece) than a classic direct mail campaign. However, it can be incredibly effective when seeking out a smaller number of prospects, such as a specialized targeted audience, where you have a high wager.
How effective? The two campaigns above had more than a 20% response rate.
Take a look at my 3.5 minute video briefing “3-D Marketing” that gives you more details.
Click below:

You can also call me at 310-212-5727 or email me at craig@cdmginc.com. My team of professionals and I are experts at creating eye-catching, exciting 3-D campaigns, and we can put something together for you, too!