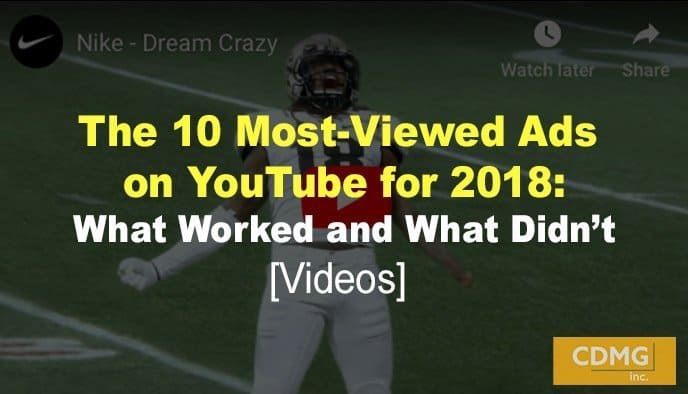 And many of those videos are ads or commercials that sell a product or service.

That represents 5 billion opportunities to sell – but are companies and brands really maximizing these opportunities?

Video is powerful. For every campaign I run, I create a video to run as a pre-roll commercial on YouTube, on the landing page and in other digital assets.

People love to watch video. But getting them to respond takes a specific direct response approach that includes “you”-oriented copy and a strong call-to-action to buy.

Let’s take a look at the 10 most-viewed ads on YouTube in 2018…and see what worked, what didn’t and how well these brands and companies followed the principles of strategic direct response marketing.

“Alexa Loses Her Voice” originally aired during the Superbowl, and quickly racked up views. It’s a clever ad that features an all-star cast, including chef Gordon Ramsay and female rapper Cardi B. But it doesn’t have a strong call-to-action to actually purchase Alexa – losing a valuable opportunity for Amazon to increase sales and get a massive response from this ad.

(The original ad has been removed from YouTube, but you can watch the same ad again, above.)

“YouTube Music” is an ad for a new music app that users can use to access audio files, video and more. The ad features multiple artists, reaches a wide audience and uses the Beatles song “Come Together” as the soundtrack.

It’s a powerful ad with “you” -orientation. Plus, it has a call-to-action at the end of the commercial to “Get the new app” on the app store.

“Real Support Makes Real Heroes” is an Indian commercial that advertises a cell phone. The ad is funny and memorable – showing the story of how mischievous kids became top cricket players for India – but it doesn’t ask the viewer to purchase the phone, or give a strong idea of the benefits of the phone.

“Nike – Dream Crazy” is a powerful commercial for Nike that inspires and provokes with a series of athletes that are “doing the impossible.” The ad received a lot of attention for featuring Colin Kaepernick, the NFL player who refused to stand during the national anthem.

Although the advertisement is well-done, it does not call the viewer to action. Like Amazon, Nike missed a powerful opportunity to actually boost sales with this commercial – telling viewers to “Just do it,” but not to buy anything or respond to an offer.

The fifth most-watched YouTube ad in 2018 is a safety video for Turkish airlines. Turkish airlines monopolized on the success of the “Legos” movie and used Lego characters to give the safety precautions. The video is funny and engaging, and gives viewers clear ways to respond – although the ad is not selling anything explicitly.

Groupon – an online coupon and discount service – showed an ad during the SuperBowl featuring comedian Tiffany Haddish. Using slapstick humor to get the point across, the ad uses “you”orientation and features a spokesperson (both direct response tactics), but had a weak call-to-action – simply saying “Download the app and save.”

The ad would have been stronger if it had shown the CTA as text across the screen…and given a clearer idea of the benefits of using Groupon – for example, telling how much money you can save by using the app.

Samsung’s commercial for their galaxy phone is a clever commercial showing the benefits of using a Galaxy over an iPhone. The commercial showcases example after example of the Samsung’s supposedly superior performance to the iPhone, displayed in a series of travel-related frustrations for one woman.

The ad was powerful and persuasive – comparing Samsung’s product to Apple’s – but it did not ask the viewer to buy the phone, or tell them where they could. Another missed opportunity.

“HomePod” advertises Apple’s “rival” product to the Amazon Alexa. The ad is high-production and features a famous musical artist. It’s catchy and engaging, but other than showing that the “HomePod” may know your favorite kind of music, it doesn’t give any additional benefits – or ask the viewer to buy it. This ad is pure entertainment – not marketing.

Like “Homepod,” “Heart of a Lio” is great entertainment – but it’s not advertising. The ad shows the story of world-famous soccer player Lionel Messi, in 3-D animation. It’s fun to watch, and very inspiring….but Gatorade barely makes an appearance during the commercial, and the end simply shows the “G” for the sports drink.

“Rescue the Blue Dinosaur” is a high-action, gimmicky ad that allows viewers to actually “pick their own path” while watching the animated adventure of a Lego character. “Rescue the Blue Dinosaur” is very engaging – but it doesn’t make an offer to purchase anything of value to the viewer. In fact, the ad simply continues on and on while the viewer keeps picking “his own path.”

Most of the most-watched ads on YouTube represent missed opportunities to sell. They were pure entertainment, not advertising.

The most effective ad was most likely #2 – YouTube’s own “YouTube Music” ad. It had “you” orientation, and followed through with a call-to-action to download the app at the end of the ad.

However, it’s worth noting some common themes that can help you understand what consumers like to watch now:

I’ve created over 300 videos for my clients, including 13 infomercials. In fact, I recommend a video for every client. Watch the video below to see samples of some of the videos I’ve created.

Critical Marketing and Advertising Resolutions for 2019

Make Infomercials Work For You: 12 Strategies to Use Now