U.S. Postal Service Massacre: $70 Billion Bailout Ahead? 8 Shocking Facts on What the USPS Must Do to Survive 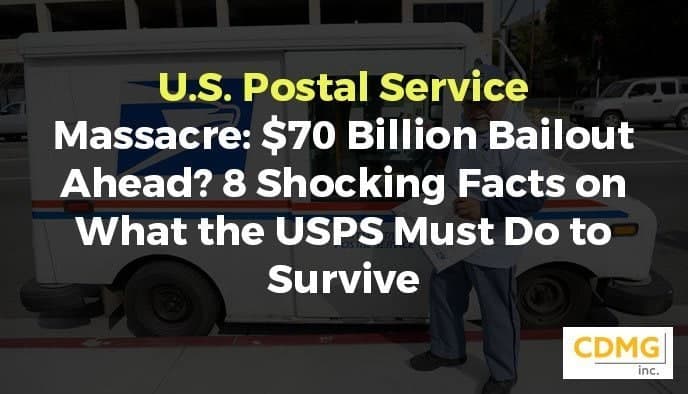 The U.S. postal service burned through $2.3 billion this quarter.

Packages and first class mail volume were also down.

Losses were up from the $1.49 billion deficit from the same period last year.

But operating expenses for this quarter were up 4.3%: $797 million – $19.3 billion. That’s despite not making required healthcare payments to employees.

Taxpayers are facing a $70 billion bailout.

Why is this happening?

Because the United States Postal Service is appallingly dysfunctional. It’s an out-of-control bureaucracy.

And, typical of any bureaucracy, it’s resistant to any sort of change or positive progress.

Here are 8 facts you need to know now about the inefficient, wasteful Postal Service…and what needs to be done to reform the USPS before a $70 billion bailout is necessary.

Fact #1: The USPS has hiked up postal rates for 2019, killing business and innovation.

And instead of the Postal Service generating increased revenue, it’s generating less.

But government-protected agencies don’t have to operate profitably.

All they care about is collecting their paychecks and keeping their cushy taxpayer-backed benefits.

Fact #4: The postal bureaucracy is archaic, resistant to change.

This is just one example of crushing innovation…or doing the most expensive activity.

Fact #5: The Postal Service is currently a government-protected monopoly that would benefit from healthy competition.

Fact #6: Postal vehicles are falling apart – and now the USPS has responded with a pricey, “eco-friendly” and wasteful “solution.”

Fact #7: The Post Service shouldn’t be controlled by Congress.

Fact #8: President Trump’s team is proposing to privatize the post office in a massive restructuring.

It’s the only hope before a massive government bailout.