President Trump has a historic opportunity to save the American taxpayer from a $50 + billion bailout … and turn the failing Postal Service around and Make Mail Delivery Great Again.
The current postal monopoly is dysfunctional.
Why? Because of…

Here are 10 frightening realities about the Post Office…and what must be done to save taxpayers from a massive bailout and make mail delivery great again.

The Post Office is reporting $2.7 billion in losses over the last year, less than $5.6 billion from the previous year…but still a massive loss that taxpayers will have to pay for. 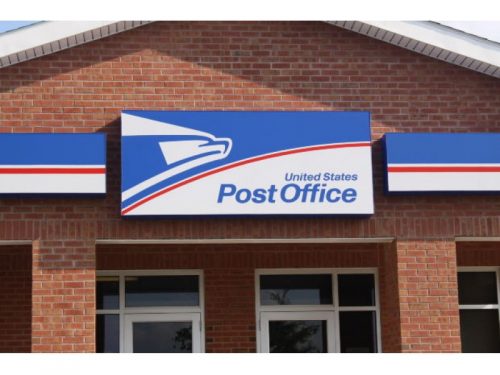 The huge, inefficient, corrupt bureaucracy did not make any payments of the $6.9 billion due to the government in unfunded pension and benefits liabilities.
The Post Office has lost money every year for the last 11 years. Why the massive debt?
Here are just a few reasons:

The whole system is unsustainable, but the Post Office keeps doing things wrong.

Reality #2: Under President Obama, the entire system has become a joke.

The Post Office is run by the Postal Board of Governors. Nine members are appointed by the President and approved by Congress. Also, the Postmaster General and Deputy Postmaster General are on the board—a total of 11 people. The governors advise the Postal Service on management, can fire the postmaster general, and more. They also approve rate hikes.
The board must have six members to have a quorum. Currently, they only have two members on the board: the Postmaster General and the Deputy Postmaster General. The other nine seats are vacant.
Why?
One US senator—most likely Bernie Sanders (I-VT)—is holding up any progress because of the postal unions. No new governor has been appointed since 2010.
President Trump has nominated three people to serve on the board, including the agency’s former inspector general, but the seats are still vacant…leaving the USPS to make decisions in their own self-interest.
In fact, the Board of Governors has taken full advantage of this circumstance. Without a quorum, the Board has established three new rules out of thin air:

It’s absolute power with no oversight or accountability.
So, without a quorum, the Post Office hiked rates anyway on January 20th, 2017, hurting itself in the long run and harming businesses who rely on the mail to generate sales—and jobs.
And now they plan to hike them again, without legal quorum.

Reality #3: The Postal bureaucracy is archaic, resistant to change.

Overstaffed, fighting automation, and backed by resistance from powerful postal worker unions, the postal bureaucracy has become wasteful and inefficient. They make decisions not based on market need and business reality, but what pleases bureaucrats, unions, and politicians.
The USPS is the only kind of formal communication that hasn’t undergone major transformation in the last couple of decades. Unlike the telephone and the internet, the Post Office remains the same and becomes even slower every year, delivering letters the old-fashioned way.

Reality #4: The Postal Service is a government-protected monopoly in need of competition.

Monopolies don’t work, especially the monopoly bureaucracy. Only choice and competition can create efficiency and progress. If the auto industry, computers (including email), and eye surgery were bureaucratic monopolies, their products would be very expensive, second-rate, and immune to positive change.
If the horse and the buggy industry were protected just like the Post Office, we would be riding horses instead of high-powered cars. We would have giant computers like in the 1960’s, not iPhones in every home. We would have government-approved glasses, not Lasik.
Years ago, the Post Office tried to stop UPS, FedEx, and other private delivery services. Fortunately for businesses and consumers, the government monopoly failed. Then the USPS tried to control email. But fortunately for businesses and consumers, they failed again.
Still, the Post Office has advantages over its competitors, including a legal monopoly on delivery of non-urgent letters, tax breaks, and subsidized loans. Combined, these benefits provide an extra $18 billion every year to the still-struggling Postal Service.
Although the USPS has competitors in the package-delivery industry, it still has a public monopoly over letter delivery, for reasons that remain unclear.
In a free economy, the best competitor wins. If the Post Office was the best at delivering mail, it would gain a natural monopoly. But this archaic and inefficient government agency hasn’t had to prove itself to be the best because there are no natural competitors.
There is an argument that the Post Office must have a legal monopoly in order to ensure that urban and rural areas have the same access to mail delivery. This argument doesn’t hold up, however, when you consider that the government could potentially subsidize rural mail delivery, if necessary at all.
The USPS monopoly is costing the government billions of dollars a year. With privatization and a growth of competition, we might see improved mail delivery…and reduced spending.

Reality #5: The Post Office is Discriminatory and Irrational in its Pricing – Amazon is Given Artificially Low Rates…Losing Even More Money. 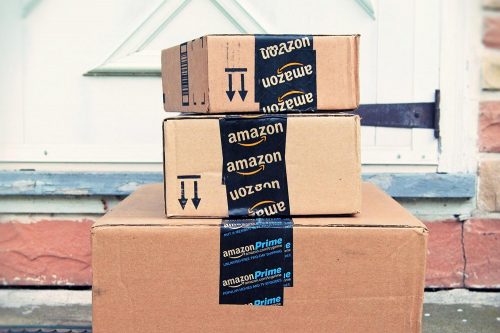 The government keeps its deals secret.
But what we know is that the Post Office monopoly is using its power to give special favors to Amazon. All of the other private delivery companies and Amazon’s competitors have to pay higher rates.
Amazon’s competition doesn’t get special rates.
FedEx, UPS, and other private delivery companies can’t compete.
The Post Office charges Amazon roughly half of what its competitors would charge Amazon—proving the reality that government agencies make political decisions, not decisions based on the free market.
The USPS keeps prices artificially low on competitive products from Amazon by using subsidies…plunging them deeper and deeper into debt.
The USPS makes only $1.39 on competitive products, while it makes between $1.69 and $2.21 on market dominant products.
However, price increases on competitive products cause demand to plummet. So, the Post Office keeps rates low…warping the market and giving competitive businesses like Amazon an unfair advantage.
Every year, the Postal Service’s Priority Mail loses $1.9 billion, and Ground Shipping loses almost $1 billion.
President Trump recently tweeted “”Why is the United States Post Office, which is losing many billions of dollars a year, while charging Amazon and others so little to deliver their packages, making Amazon richer and the Post Office dumber and poorer?”
It’s timely because it brings up the year-end financial report of the USPS, which lost $2.7 billion in 2017.
While companies like UPS and FedEx earn massive profits, the Postal Service sinks further into debt.
And yet, they have subsidized Amazon. And guess what Amazon is doing in return:
The money that Amazon saves on shipping costs has given it the ability to create its own package delivery system. Amazon even has its own cargo jets that fly in and out of small airports, and has opened up smaller, more remote distribution centers for its Prime customers.
Over the long run, this strategy will further weaken the USPS’s financial position.
Ultimately, its low rates for the online mega-retailer will sink this government agency deeper and deeper into debt.

Reality #6: Post offices have fallen by the wayside, and are in desperate need of repair…creating even more debt. 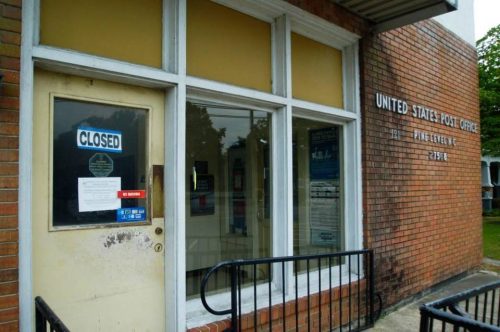 Nationwide, Post Offices are a wreck.
Even the USPS Office of Inspector General has said that the majority of facilities nationwide violate security and building measures. And nearly half of them violate cleanliness and maintenance guidelines.
Many buildings have been found to be infested with mold, bugs, or rodents, and even have foliage growing inside the facility.
Plus, most Post Offices do not even maintain a customer complaint log…meaning that most issues go unresolved and unacknowledged.
In 2011, a proposal to shut down 3,600 underused Post Offices was met with such hostility and hysteria that it didn’t even make it to 2012.
Although the Postal Service has started to drop Post Offices inside of retail outlets like Staples, the USPS government employee union doesn’t like them…just one more proof of an inefficient and stubborn bureaucracy that refuses change, resisting the needs and wants of the consumer.

Reality #7: The Post Office can’t be controlled by Congress.

Much of the dysfunction is caused by the United States Senate and House.
Individual members prevent the closure of inefficient postal facilities, the hiring of good people, and implementation of technical improvements.
Politicians want to please their union donors rather than allow the marketplace to work.

Reality #8: The Postal Service plans to increase postal rates…bad for thousands of businesses.

The Postal Service’s solution to its massive debt is to hike up rates 34-41% over the next five years…without approval from Congress.
Only a government agency can increase rates independently, without responding to the market- an inefficient and expensive move that benefits the agency and hurts consumers.
But commissioners of the Postal Service have decided to override the law’s inflation rates…ignoring the principles of the free market.
The proposal includes the following measures:

Once compounding occurs, these rates will add up to an overall 34-41% increase, depending on how well the Post Office meets its goals.
These price hikes aren’t permitted under the 2006 Postal Accountability and Enhancement Act, which is the major law that governs the Postal Service.
This colossal increase in prices would hurt thousands of small and large businesses who rely on direct mail, and also hurt magazines and newspapers.
And it’s not the first time that the USPS has hit newspapers hard, especially smaller publications. In the early 2000’s, they came up with a new pricing system that targeted advertising inserts that have been critical as revenue sources to some newspapers and weeklies.
The new increase would be lower than average for magazines that use co-mail, and higher than average for less efficient mailers.
Already, new postal rates are hitting businesses, killing jobs and commerce. The excessive rate hikes produce less revenue, and the growing Postal Service’s deficit grows.
The latest hike is a huge job killer—and the Post Office, the consumer, and businesses are the victims.
The final vote on this measure will occur in March of 2018…giving all interested parties time to fight against this destructive change that would further hurt consumers and the economy.

The proposed change by the Postal Service means continued inefficiency, massive debt…and more measures that hurt consumers and weigh heavily on taxpayers.
There’s a better solution for the massive multi-billion-dollar debt of the Postal Service.
Like Obamacare, a repeal and replace system must be established for the USPS. A well-planned transition is needed.
The dysfunction can’t be fixed without major, immediate reform.
My clients won’t send as much- and some, any- direct mail with the coming hike. They will lose new clients and experience less revenue from existing clients. The clients’ prospects won’t get their special offers. They will lose a great product. And, the Post Office won’t get any revenue.
Bad policy. Less mail. No revenue. Everyone loses.

Reality #10: The solution to the USPS mess is competition and choice.

The USPS is hurting the American economy and jobs….and it’s hurting taxpayers.
Trump has gotten a good start by nominating three new individuals to the Board of Governors.
But there’s still more to be done.
Here are further steps President Trump must take so that everyone wins:

Not only is the United States Postal Office going bankrupt, but their wasteful incompetence and abuse are hurting business owners, consumers, and jobs.
There can be no delay. Trump needs to act now and Make Postal Delivery Great Again, or at least tell the Government monopoly: “You’re Fired!”
Contact your representatives right now and tell them: “Reform the Postal Service now!”
I have mailed over a billion direct mail pieces. If you need help putting together a direct mail campaign that will work- despite the inadequacies of the post office- call me at (310) 212-5727 or email Caleb at caleb@cdmginc.com.